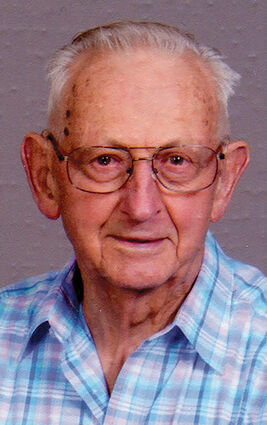 Wayne was raised in South Dakota until he was 12, when his family moved to Lebanon.

He married Leona Mae Duncan in 1948 and they moved to the Liberty area near Sweet Home. Leona passed away in 1986. He married Opal May Matthiesen in 1987.

Wayne worked for Willamette Industries in Foster, retiring in 1987 after 36 years.

Wayne was a member of Lebanon Kiwanis. He worked in the Strawberry Festival concession booth, the fireworks booth, Highway 34 cleanups, paper drives and food basket efforts. He was Lebanon's Kiwanian of the year in 1994. He also received the Hixson fellowship award.

He was an active member of the Lebanon United Methodist Church. He was involved with the Methodist Men's Group and did anything that needed to be done.

He was preceded in death by his first wife, Leona; his parents, Alfred and Mabel Dahlenburg; step-mom Valerie; brother Lee; and sisters Joyce, Doris and Betty.

A memorial service will be at 1 p.m. Friday, June 17, at First United Methodist Church in Lebanon. Private burial took place at Liberty Cemetery in Sweet Home.

Memorial contributions in Wayne's name can be made to First United Methodist Church, 1890 S. 2nd St., Lebanon, OR 97355.