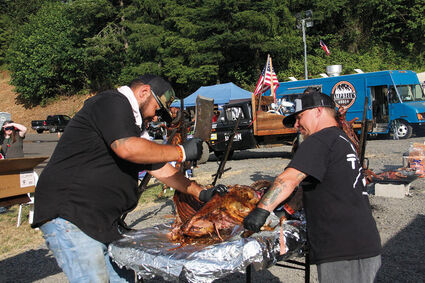 Rey Morales of BBQ King in Rialto, Calif, left, cuts a Barbados ram with Scott Borges of the Salem-based Super Skewer, during the Icebox Cookoff hosted Friday through Sunday by Radiator Supply House at its plant on 47th Avenue.

Radiator Supply House hosted the Icebox Cookoff barbecue competition Friday through Sunday, July 1-3, drawing some of the top talent in the field.

"It went very well," said Will Garrett, of what essentially was the inaurgural event. His firm hosted a smaller competition last year, but this one was open to the public on Saturday.

Garrett said an invitation-only crowd of approximately 800 attended on Friday, as 35 professional pitmaster teams competed. Saturday's crowd "started pouring in just before 11 a.m. and rotated all day. He estimated the numbers consistently at about three times th...