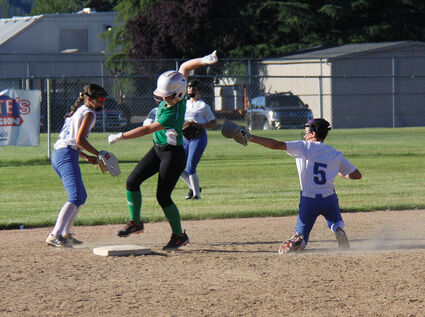 Coach Sandy Brown said her players were "exhausted" from activities earlier in the day and the performance was "definitely not our 'A' game."

In the first photo, Ivy Ayres dodges a tag to reach second.

In the second photo, Ellie Chiafino, left, attempts to corral the ball as a Junction City player arrives at second. At right is Aaliyah Grown.

In the third photo, Kalissa Ellis waits for the throw as a Junction City runner reaches first.

The game was the final of the season for the team which, Brown said, had...