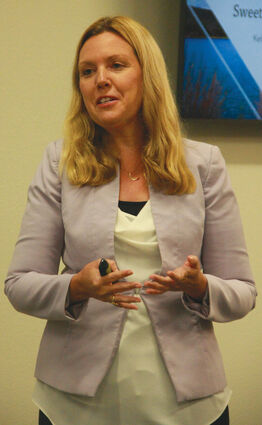 Mahler wrote that the City Council, after considering the city’s needs, extended an offer to Young on “a rare occasion of unanimity.” The other top contender vying for the Sweet Home city manager position was in-house candidate Blair Larsen, currently the city’s community and economic development director.

Young, finance director for the city of Clearlake, Calif., has accepted the position and anticipates a start date of Oct. 1.

“We hope that the entire community will join us in extending a warm welcome to Kelcey as she acclimates to our community and helps lead us into the future,” Mahler wrote. “The city is on a good trajectory and our goal is to continue to follow this path to make our community an even sweeter place to live.”

Young has held the position of Clearlake’s finance director for a year. She graduated from California State University Humboldt in 2002 with a bachelor of arts degree in liberal arts and sciences, general studies and humanities. In 2006, she earned a master's degree in social science (environment and community) from Humboldt as well as an environmental planning certificate from Rutgers University.

She was a freelance photographer in the greater Seattle area from 2008 to 2013, then for Bellevue College in Washington, where she worked with parks and recreation, art and art walks before the college moved her to procurement.

"Unfortunately, that took me away from the art side, which I absolutely loved," she said during a public presentation in Sweet Home earlier this month. "However, I found a new love for procurements and contracts and so forth."

That passion sent her to San Antonio, Texas, where she became a contract administrator and contract manager for the city, which had both a $560 million and $850 million bond. Many projects commenced, including a new city hall, arena, stormwater, roads and other infrastructure.

"I was able to work with all of the bond programs," she recalled.

Young was then asked to travel to Dallas, Texas, to help with some of its compliance issues. She served there as the city's assistant director of procurement operations. She noted that the city had a few grants it had to return, as well as a "huge billion-dollar bond project."

Upon arriving, she developed a contracting program and compliance system and trained the staff to use it.

"I got to be involved in school districts, parks, nonprofits and lots of development projects, both in San Antonio and in Dallas," she said.

In her current role as Clearlake's finance director, Young has, in addition to rolling out the budget and handling payroll, worked on various development opportunities and business licenses as well as overseen emergency management. In 2011, she received a Federal Emergency Management Agency Professional Development Series certification, then a Lean Six Sigma Black Belt business certification in 2017.

Mahler, explaining the hiring process for the city manager, noted that from the beginning the council requested that the Oregon Cascades West Council of Governments (OCWCOG) guide it through the candidate search “to be sure that the hiring process was as impartial as possible.”

He noted that the council approved a list of knowledge, skills, and abilities it believed would be necessary to see the city through the next stage of growth.

“From that list, a scoring tool was developed by our OCWCOG representative,” Mahler wrote. “That scoring mechanism was used to invite candidates for the first and second interviews and continued throughout the hiring process.”

“The city council wants to thank staff for their valuable contributions to the hiring process and helping the council with their evaluation of multiple applicants for the city manager position,” Mahler added.

Mahler expressed thankfulness for Larsen’s role in the city.

“We are grateful to Blair Larsen for the work he is doing as our community and economic development director,” Mahler wrote. “We were also pleased to hear that the community and staff members recognize his skills and accomplishments. The fact that he was in the final round of interviews confirms their good judgment. We hope Sweet Home will continue to enjoy his excellent service for many years to come.”

The hire comes in the aftermath of former City Manager Ray Towry’s resignation in February. Since then, the job has been filled by City Manager Pro Tem Christy Wurster.