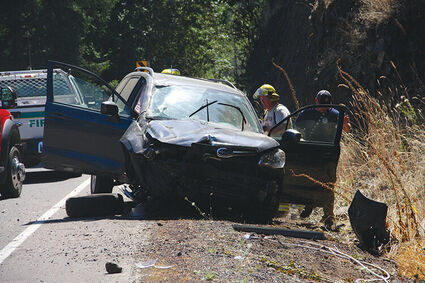 Medics work at the scene where Lebanon man was injured when his car ran off the road on Highway 20 east of Sweet Home Thursday, Aug. 24.

A Lebanon man was injured Thursday, Aug. 24, when his car ran off the road on Highway 20 east of Sweet Home.

According to the Oregon State Police, Elwood Damon Houston, 81, of Lebanon, was eastbound near Milepost 34, east of Quartzville Road, when his vehicle ran into a ditch after negotiating a curve. The vehicle struck a road sign, then a rock wall.

Houston was wearing a seatbelt and airbags deployed, the OSP said.

Police said the crash may have been the result of "medical issues."

Houston was transported to the hospital and his car was towed.