SHPD's first narcotics dog gets retirement sendoff (but no pizza) 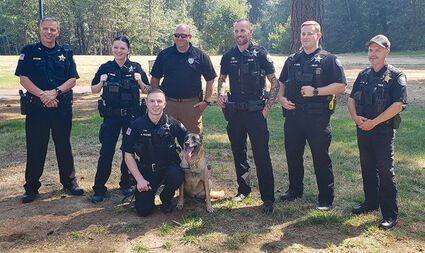 Police department members gather for a group photo with Gemma during her retirement party.

Instead of taking a bite out of crime, a narcotics canine for the Sweet Home Police Department last week took a big bite out of cake.

Gemma, a Belgian Malinois that began training at the police department in 2017 when she was 3 years old, celebrated her retirement with friends – and the aforementioned confection – Wednesday, Aug. 31, at Sankey Park.

After five years serving the community as a public relations tool and drug detection dog, she was too doggone tired to continue working.

"She's at the age where most dogs end up retiring out of the canine program," Captain Jason Ogden said....