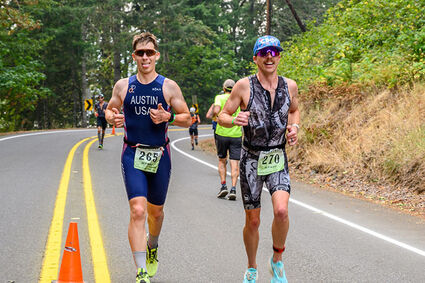 Despite some "hurdles," more than 600 contestants showed up Saturday and Sunday to compete in a multitude of Best in the West Triathlon series events at Lewis Creek Park.

"It went really well," said Staci Bronson, who co-directs the event with her husband Blair Bronson, who founded it in 2012.

"It was a good year," Blair added, noting that nearly all the event's emergency planning procedures got very real as temperatures shot up to 100 degrees, the winds kicked up and power outages threatened, though the park did not actually lose power.

"Plus, we still have a pandemic," Staci said.