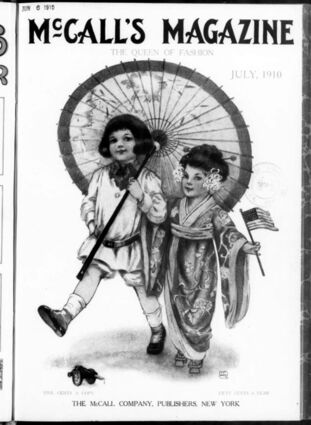 McCall's readers could see the world, thrill to adventures, plot exotic menus and astonish at parties for only a nickel per 100-plus-page issue in 1910.

When a policeman brought back her soiled and bedraggled little dog, his mistress rejoiced, but asked, "How did he ever get so wet?"

"Why, when we found him," replied the policeman, "a man had him tied on a pole, washing windows with him."

That's a little 1910 humor from the July issue of McCall's Magazine, which subtitled itself the "Queen of Fashion." We came across it in the East Linn Museum research room and thought, "Why not take a look?"

In 1910 King Edward VII of England died. As successor to his mother, Queen Victoria, he...