An artist's eye for nature 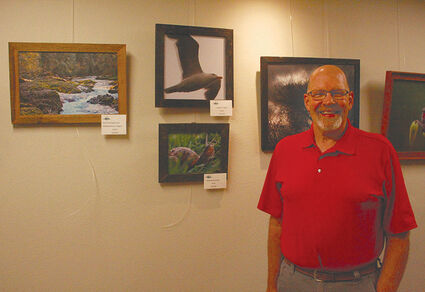 Craig Fentiman stands in front of some of his photographs, also shown below, on display in the gallery at City Hall. His favorite shot, he says, is the garden snail displayed off his right shoulder.

It's never too late to chase your dreams.

Photographer Craig Fentiman has captured open-space adventures on film since his adolescence. But after retiring last year, he decided to pursue this lifelong passion on a more full-time basis.

And now, 22 of his works over the last half-decade can be seen in a Sweet Home Coalition for Artistic and Scholastic Enrichment exhibit, which opened Sept. 12 for a six-week run at City Hall. (An artist reception was held Friday, Sept. 16.)

Fentiman, a longtime outdoors enthusiast, first became interested in photography while living in California about a hal...