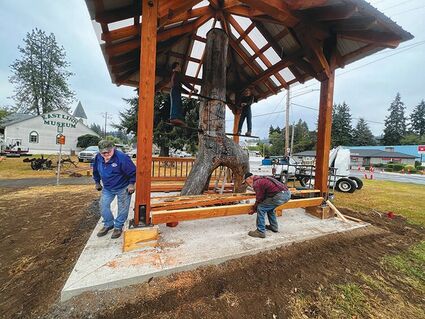 Mike Melcher, left, and Robin Miller work last week on a gazebo to shelter the wood carving of loggers located next to East Linn Museum.

Robin Miller knelt on the ground in the yard west of East Linn Museum last week, twisting wires together.

He was putting the finishing touches – lights – on a gazebo shelter that he and others started working on a month ago. Their goal is to protect the wood carving of loggers that Miller and Mike Melcher erected in October 2018 outside the museum in the triangle of land formed by Long Street, Holley Road (Highway 228) and Main Street (Highway 20).

The two decided that they wanted to erect a wood carving honoring Sweet Home's logging heritage and went t...