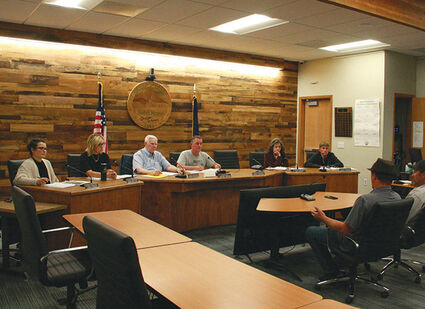 The station will occupy an already paved area on the railroad tracks' north side, at the end of 24th Avenue.

T2 owner Jeremy Totman expressed his logging operation's need for another yard, in addition to those he currently leases in Junction City and in Indianola, Wash.

"We need a third yard," he said. "And I really like the in-and-out of 24th Avenue. It's good access. It's easy to get on the highway. With our mill out there just out of Sweet Home, we can't store enough sawdust. And the way we manage these mills is when they make the sawdust, we have to get it dumped, and (it needs) somewhere for it to go. And I don't have a big enough footprint. So when (Victor) purchased that property, I thought that would work out well. It's in a spot that's close to us."

He explained his plans for the property.

"It's a real simple process that we'd be doing," he said. "We'd bring trucks in there that would unload themselves. Then, at the end of the day, a loader would shove the pile up, keep it nice and tidy. And then, as we needed it, we'd load trucks and send them down to the mill. There would probably be one person there unloading themselves at any given time. It's going to be a very simple in-and-out process. It would be pretty quiet. The loader would only be running when the truck was there to reload it, or at the end of the day."

Work could even take place at night.

"Most of these sawmills with a good market run 24 hours a day," he said. "We have trucks that come into our yard 24 hours a day, seven days a week. I would love to have the opportunity that when the bunker is full at a mill, and if it's in the middle of the night and it needs to go down there and be pumped off, it could be done."

"If you were trucking through a residential neighborhood, which this is not, then I might have some concerns with trucks in the middle of the night," she said. "But you're not going through and disturbing any residents who are sleeping at night."

Victor bought the 154-acre former Weyerhaeuser/Willamette Industries mill site from Linn County in February for $800,000. The county had foreclosed on the address more than a decade earlier, after its then-owner, Western States Land Reliance Trust (which took over the site after the mill's 1994 closure), failed to pay $500,000 in property taxes after initially slating the area for a housing complex.

At the time of his purchase, Victor said that he intended to begin developing a road system for access to the neighboring property to the north, the former Morse Bros. (Knife River) rock quarry now owned by the city, which plans to establish a venue for the Oregon Jamboree and other community events on its 250 acres. Victor said that plans for his property include both housing and commercial development.

"I'm just trying to get some use out of (it) and start generating some income and some sort of business, and hopefully maybe some industry in there," he told the planning commission. "It was used for years as a mill, and in Sweet Home there's trees everywhere, and that seems to be the strongest industry around here, with the other mills. If we can get something going that's in that industry, I think it will do well.

"The hope is that something would go down there, maybe (Totman) starts putting in a plant or something that's going to employ more people in town," he continued. "That's what we're shooting for, is something that can get there and hopefully start getting bigger. Obviously, if we were going to do that, then we would take on the water, sewer and power - everything that would have to go with that. But at this stage, that's not what we're needing."

"You've got to start somewhere," Totman said. "If we get something started, you never know what it could turn into. But at this point, I need some room for sawdust to keep the mill going. We run the mill 24/7 out there at T2, and it eats a lot of material. As markets go up and down, I have to have a stockpile, because when markets curtail, it's what keeps us going."

He provided more details on the sawdust.

"Primarily at this point, I'd be bringing in alder and maple sawdust, and possibly some alder and maple chips, and I would keep them separate side by side," he said. "Then that's what we pelletize. I'm not going to say that some Douglas fir sawdust couldn't come in, and I would keep that separate. But our footprint would stay small and tidy. It would be a good-sized pile for height, but we would only pile it up as high as a loader could reach."

Planning Commission Chair Jeffrey Parker addressed what he called "the elephant in the room."

"The only reason this is coming before us is because at one point it was zoned from an industrial property to a recreational commercial property to specifically serve one development that never happened," he said. "This property looks as though it's been industrial near its entire life that we know of. So it would be nice to have at least something down there. It's been vacant for so long.

"I like the idea of them getting their toes wet and seeing where this is going to go," he continued. "And maybe it does invite something in, as far as other industry, or an expansion, or it gives (Victor) the funds to pursue actually getting this property up and running, and not having another situation where we had the previous development that just kept dragging on and promises were never kept."

"I like it because it kind of brings life back to the property," Commissioner David Lowman said.

"It seems compatible with the neighborhood, and staff has not identified any negative aspects of it," Melcher added.

According to Victor, the reload station wouldn't interfere with future development on 24th Avenue.

"It's going to be a few years until I'm ready to get down to that area, at least," he said. "And if I did, his operation can be picked up pretty quick. For the next one to five years, I'm going to be working on pretty much the western side of the property, with demolition, repair, and just trying to get the rest of the all-clears on all of that stuff. That's my primary focus right now."

One of the all-clears Victor mentioned is a no-further-action order from the Oregon Department of Environmental Quality, which would signify that the property meets DEQ requirements.

Sweet Home Community and Economic Development Director Blair Larsen emphasized the importance of getting that order.

"The ultimate goal is to have a dedicated right of way through (Victor's property) that would provide access to the (city's) property (north of Victor's) and also help the city out," he said. "In order for that to happen, we need to have the no-further-action order. The city is not able to take on the liability without that. The only hindrance right now from keeping the right-of-way going through is the DEQ status, and then just working out a deal with the property owner."

Larsen said the city was slowly putting together a request for proposals for the city's property adjacent to Victor's.

"It could be that whoever responds to that RFP may also be interested in making a deal with Victor," he said.