Shadows and doubts in the tale(s) of Frank Reid 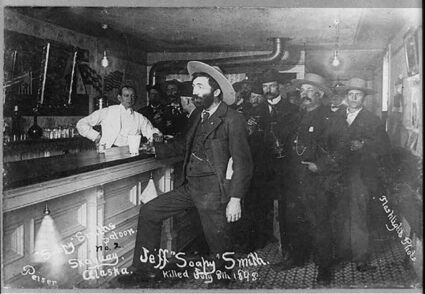 Jefferson “Soapy” Smith stands at the bar in a Skagway, Alaska, saloon in this undated 1898 photo. Both he and Frank H. Reid, who had earlier been a notorious resident of Cascadia and Sweet Home, died that July 8 following a gun battle on the Juneau Wharf. Reid was remembered locally for killing Sweet Home storekeeper James Simons during a confrontation near 22nd Ave. and Long St..

The order came from the darkness as a lone figure traveled down a moonlit Sweet Home street.

Instead of stopping, the figure turned. Shots from his gun rang out in the silence. More came from the town’s lawman, who had set up a roadblock to catch a thief. A running gunfight ensued, the sounds of which awakened the sleeping town.

Meanwhile, miles away – and reflecting events from an earlier era – a tombstone in a cemetery near Skagway, Alaska, reads: “Frank F. Reid, Died July 20, 1898. He gave his life for the honor of Skagway.”