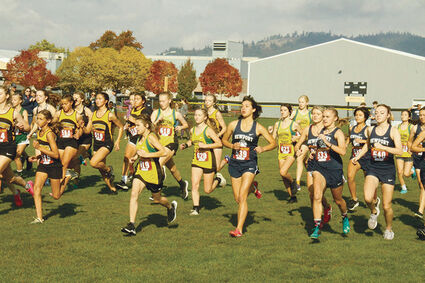 McKenzie Miller, left, leads the Sweet Home girls off the starting line at the OWC district championships. Behind her are, from left, Rylee Markell, Amelia Sullens, Natiyah Walters-Koenig, Peyton Markell and Meeja Bitter, at far right.

Coach Dave Martin was pleased with most of the performances he saw, he said.

"Several people had major PRs," he said. "From the beginning of the season to this race we had some people who improved by three minutes or more."

The Huskies were as young, experience-wise, as they have been in recent memory, as Martin had one two runners who had actually competed previously in cross-country. Plus, they hadn't run a race for three...