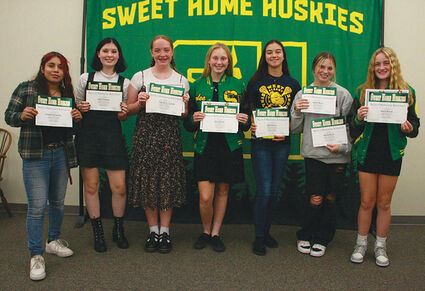 "She comes first, does everything, picks up the goals," he said. She did everything she could. She was the head and the one who moved the field around."

Best Forward honors went to freshman Anabelle Morris for her four goals and one assist. Santana called her "amazing," adding, "I can't wait to see her next three years."

Morris also earned the Rookie of the Year distinction, sharing it with senior midfielder Audrie Frangente, who took the field this season for the first time and recorded one goal and three assists.

"I wish you would have been here four years back," Santana told Frangente. "It would have been amazing having you. You bring a lot of enthusiasm and good things for our team."

"The whole midfield was great this year," Santana said. "We had an amazing three or four girls in there that were incredibly great."

"A lot of the time, speed is how we get beat," Santana said. "But she did an amazing job. Sometimes as coaches we put a little more pressure and hard work on certain kids. And sometimes it's sad to see on their face that they're frustrated because they can't stop who you ask them to stop, but they try to do the best for you."

Santana and assistant coach Jill Wilson gave sophomore Tierney Clarno their Coach's Award. Clarno began the season as a defender but soon moved to goalie, where she recorded 75 saves in eight games in what her head coach called an "amazing job."

"She's running around not only on the field, but also in practice," Santana said. "She's great, and she is fast. I've tried to get her to go out for track, because she would be great for it. I hope she tries to do that."

"Every time we have a game, she is screaming," he said. "Usually, it is an absolute must that the day after the game she'll come in and [say], 'Coach, I can't talk.' I'm like, 'OK, I'll let your teachers know.'"

He added that she "gets so nervous that I think she forgets about speaking English and speaks Spanish."

Santana spoke on the season as a whole, which saw the Huskies finish with a 2-10-2 record and take fifth place out of six Oregon West Conference teams.

"[It's] probably one of the best that I've been involved with," he said. "The girls that we have did amazing. These kids are the most amazing kids I've ever coached in every which way. They're awesome, helpful, thinking."

"This year was definitely an interesting year," Wilson added. "After having so many [COVID-19] regulations and restrictions, this was the first season where I didn't have to tell any girl on the bus, 'You've got to pull that mask up.' It was so nice to be able to get back to just playing soccer. This season was marvelous."