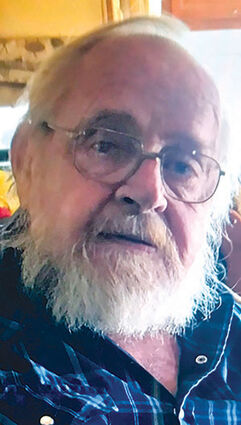 He was 4 years old when he and his family loaded up in the old car and headed out west. They arrived in Eugene in September of 1950, where his father found work with the railroad as a sign painter.

The family moved to California in about 1954 but returned to Oregon in July 1960.

He was a bright student and artistically talented; he excelled in mechanical drawing.

After high school, he enlisted in the Navy.

In 1967 he married Laura Rouch-Virden and became a stepfather to her 2-year-old daughter, Marie Virdon. In 1969, another

Although they would remain friends, the Allees' marriage ended in 1976.

As an adult, he worked many trades and often worked for his father's business as a residential and commercial painter. Later in life, he returned to school to become a building inspector.

He worked as a building inspector in California for several years, often in charge of large municipal projects. He also spent many years driving trucks, and for a time, he and his wife Anna shared ownership of a semi-truck and their own trucking company, often traveling across the far reaches of the United States.

Mr. Allee's talents and skills gave him the ability to do many things. He could design and build a house or structure that would meet all requirements. He had the knowledge and skills of an electrician and journeyman plumber, and over the years he had honed every other skill

necessary to bring a project to fruition. He was always willing to lend a hand and helped many family members with projects.

Mr. Allee was instrumental in several major home renovations, including his own. He dabbled in automotive mechanics all his life; he could rebuild engines, brakes, or almost any other part of a vehicle. He could fix almost anything.

Mr. Allee was a generous man with a dry wit and a strong sense of integrity. He was a loyal friend and loving brother. He was loved by many and will be greatly missed by all that knew him.

In 1994 the Allees moved to Lacomb, where he spent several years remodeling and improving their home and homesite. When their daughter Kathy died in 2004, she left three children. Her son went to live with his father, but Dallas and Anna took guardianship of two granddaughters, Carly and Nicole, and raised them. Both graduated from Lebanon High School.

In 2018, the Allees sold their home and purchased a 42-foot motorhome. Although they had traveled over the last few years, their home base has been Sweet Home.

Mr. Allee was a member of the Benevolent Protective Order of Elks for 48 years and served as Chaplain in Fremont, Calif.

King; a multitude of nieces and nephews; and numerous friends in the Lacomb and Sweet Home communities.

A Celebration of Life will be held after the first of the year, and notice will be forthcoming. Sweet Home Funeral Chapel is handling the arrangements.