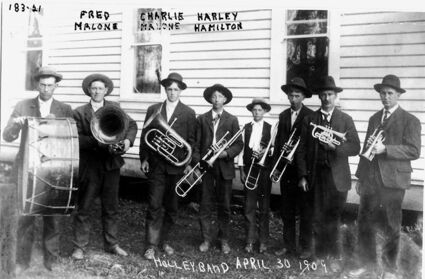 Members of the Ault Band in Holley prepare to play in 1909.

The East Linn Museum is now closed for the winter until February.

In the meantime, we ponder the ghostly sounds we imagine rising in its darkened recesses.

We know the main room once served as a school for the Sunnyside district. After the construction of the dams and flooding of the reservoirs upstream on the South Santiam River, the school faced demolition. But, when moved and rebuilt, it served two churches before becoming the museum.

Therefore, if we could hear voices raised in song from the past, would one side of the room feature young voices singing "AB-C-D-E-F-G" and verging w...