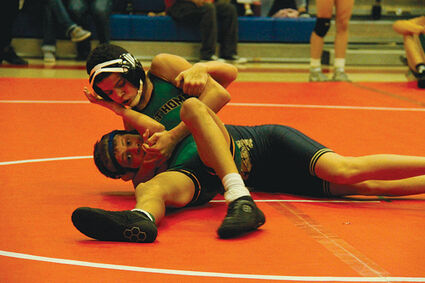 Dylan Davis puts the squeeze on West Albany's Owen Hoyt on his way to an 11-2 major decision in the 106-pound final of the Linn County Wrestling Championships tournament.

It was the third wrestling competition in four days for the girls, who, Coach Steve Thorpe said, experienced a "meat-grinder" of a week.

They started Tuesdays, Jan. 3, with wins in duals over Harrisburg and Dallas in Harrisburg, then traveled with the varsity boys on Thursday to Tillamook, before heading to Lebanon on Friday.

The Harrisburg matches were "historic," Thorpe said, noting that "having three teams c...