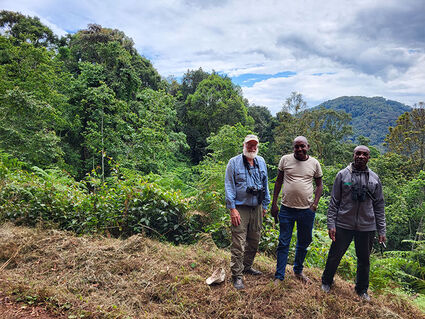 JEFF HARDING, above left, with two guides in Uganda, in the Bwindi Impenetrable Forest National Park on November 28, 2022. Center, Gideon Kwehangana, driver and guide. At right is Robert Byarugaba, a professional bird guide. The photo of a gray-headed kingfisher, below right, was taken on the Victoria Nile near Murcison Falls in western Uganda on Nov. 24, 2022.

Back in 1972, when Jeff Harding graduated from high school, his father offered to buy him a shiny new calculator before he enrolled at Oregon State University.

"They were new and exciting in those days," remembered Harding, who lives near Crabtree. "I was going to study science."

However, the younger Harding had something else in mind. "I said, can I have a pair of binoculars instead?"

His father agreed, and Harding used the gift to further what soon became a favorite hobby: birdwatching.

Harding went on to receive a bachelor's degree in zoology at OSU before earning a Master of Business Ad...