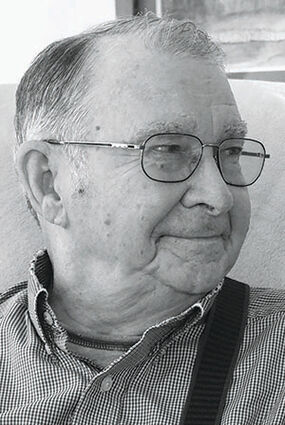 A good student and popular in the school, he served as the president of his senior class of 1943.

Along with most other boys his age he joined the Army right out of high school.

He landed on Utah Beach at D+90 and spent several months in the St. Nazaire area. As winter approached, his unit was repositioned to the Saar area of Germany, where they held the southern line during the Battle of the Bulge, eventually advancing to the Ruhr Valley by the end of the European war.

After spending some months in Czechoslovakia he returned to the U.S. by way of the RMS Queen Mary, arriving at the New York harbor on New Year's Eve.

After the war he returned to his home for a year and then, with his brother-in-law Dell Starr, went to Anchorage, Alaska, to build houses. After a brief stint working for the railroad, he decided he would rather work indoors and was hired as a journeyman carpenter and cabinet maker at Elmendorf AFB where he worked until he retired in 1977.

Oty met his wife-to-be, Beth Taylor at the convention grounds in Wasilla, Alaska. They married in Anchorage in 1953 and made their home there until 2008, when they moved to Oregon to live on the family farm on the Calapooia River.

Always an avid walker, he enjoyed hiking, fishing, and hunting in Alaska, always with family and friends. He was well-read and enjoyed quoting Robert Service and Rudyard Kipling.

In his last years he did a lot of writing, recording stories of his life and many poems. In fact, he had started on a new poem the night before he suffered his stroke.

A good friend to many, he would often call and talk to friends from his years in Alaska.

Oty made his choice to serve God as a teenager and looked forward to meeting the Lord.

He and his family have been so thankful for his devoted caregivers, Chelcie Kincaid and Gena Kittle. They helped care for him over the last few months so he could continue to live independently in his cottage at Wiley Creek.

Oty was preceded in death by his beloved wife, Beth, in 2020. He leaves behind two children, Lori and Ron; his wife Ruthanne; grandchildren Cara, Sarah and Lara; sisters June and Joy and her husband John; and many relatives and friends.

A funeral service will be at 10:30 a.m. Saturday, Jan. 28, at Sweet Home Evangelical Church. Final burial will be at Gilliland Cemetery.